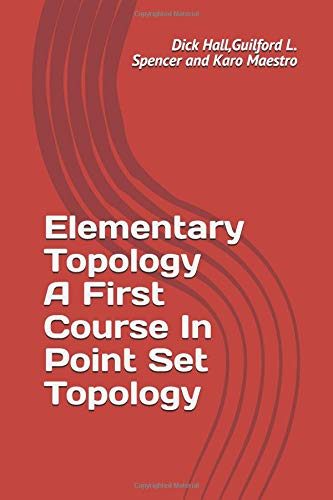 THIS IS A MODERN POINT SET TOPOLOGY TEXT FOR UNDERGRADUATES. IT’S IN PRINT FOR THE FIRST TIME IN NEARLY 5 DECADES!

AVAILABLE AS BOTH A KINDLE AND INEXPENSIVE PAPERBACK! NOW, THIS PRECIOUS LOST TOPOLOGY COURSE BOOK IS BACK FOR PURCHASING AT A PRICE ALL STUDENTS AND TEACHERS CAN AFFORD!

BEST OF ALL, BCS FOUNDER AND EDITOR KARO MAESTRO AKA THE MATHEMAGICIAN HAS WRITTEN BOTH A BRAND NEW PREFACE & COMPREHENSIVE SUPPLEMENTARY BIBILIOGRAPHY FOR THIS NEW EDITION!

Those who feel topology should be taught early will probably welcome the book by Hall and Spencer,for this book is intended as a text for an introductory course in point set topology for students who have not necessarily had courses in [real analysis on metric spaces] or modern algebra…………….

The book begins with a concise chapter on set theory….Chapter II is devoted to a treatment of the basic properties of the real number system. Concepts such as connectedness and continuity are defined and developed in such a way as to prepare the student for the corresponding abstractions he will meet in later chapters…….

Chapters III and IV, which comprise about 100 pages, are devoted to topological and metric spaces. The basic concepts are here introduced, almost always with their most modern definitions, and the fundamental theorems are carefully proven. There are a large number of exercises, some of which are routine, others of which are thought-provoking. Some topics not treated in the text, notably the theory of category and of Moore-Smith convergence, are developed in a series of exercises. The contents of Chapters III and IV will probably be the heart of any introductory course in point set topology.

The remainder of the book is concerned with some beautiful but deep and difficult concepts and theorems. The unit interval and circle are given topological characterizations along the lines first done by Janiszewski. The famous theorem of Hahn and Mazurkiewicz which characterizes the continuous image of the closed unit interval, as well as Zippin’s characterization of the simple closed surface are presented. Also proven are the Jordan curve theorem, the Jordan-Schoenflies theorem, and theorems concerning complex concepts introduced by Sierpinski and Bing. The last chapter of the book deals with transfinite reasoning, i.e., the Axiom of Choice, -Zorn’s lemma, well-ordering, and Tychonoff s theorem……

Some readers of the book may be critical of some aspects of the authors’ style. For example, some may feel that the authors should have presented Hilbert’s proof of Peano’s startling discovery that the closed unit square is the continuous image of the unit interval in order to elucidate the statement and proof of the more general theorem of Hahn and Mazurkiewicz. Others, how ever, may feel grateful that the authors left to the instructor pleasant opportunities to delight and enlighten his class. In any event Elementary Topology is a welcome addition to the relatively few books suitable as texts for courses for advanced undergraduates in modern mathematics.

The textbook reviewed here is meant for an undergraduate course (possibly even for juniors) with this dual objective: first, to produce such understanding of the facts and techniques of elementary topology as “will help the student immeasurably in his courses in advanced calculus, real variables and complex variables . . . “; and second, to constitute that course in which the student is definitely acquainted with rigor.

It does present the basic material carefully and patiently, with many exercises, a good part of which requires much reexamination of the proofs given; and there are twenty-six figures. Using the book in the way suggested would involve (in most schools) serious revision of the program of courses. The book ought also to be considered simply as an introduction to topology………….

The authors deserve praise for exhibiting a teeming arena for the application of easily intelligible topological techniques, to say nothing of the inherent interest of the topics already mentioned (and Jordan’s curve theorem, to mention another)………….

There is, of course, considerable topological activity concerned with phenomena in lower-dimensional Euclidean spaces in which it appears possible to do quite well without some of the tools being sharpened in algebraic topology; and for such research this book will prepare the student quite well………

We invite anyone preparing a course in topology to consider this work on the merit of the substance and treatment of the fifth chapter which is even physically half the book.

Yet Another Review For Hall And Spencer’s Elementary Topology

The American book [confines itself] to “general point-set topology,” the [combinatorial] side of topology being excluded (except for the Jordan curve theorem). On the point-set side the book starts from the beginning and leads the reader by slow and careful steps to some very advanced points indeed. For these reasons the book [is recommended] for a reader with a serious interest in the subject, particularly one who must in the main get along unaided. It assumes very little previous knowledge of mathematics…. In the course of a proof at all long the authors are ever ready to halt and summarize the position reached, thus giving the reader a breather. As to the advanced points reached, they include Zippin’s characterization of the topological 2-sphere, the theory of partitionable spaces and the relations between Zermelo’s Axiom of Choice, Zorn’s Lemma and the Tychonoff Product Theorem…………..

Blue Collar Scholar is making yet another wonderful out of print textbook available at a price anyone can afford with this outstanding point set topology text. Firstly, like Murdoch’s linear algebra text we’ve republished , Hall and Spencer is one of the first textbooks on abstract topological spaces that gives a broad and detailed presentation for well-prepared sophomores or juniors of average ability.  The authors write both mathematically carefully and select topics to establish a solid foundation in topology.

Like linear algebra was when Murdoch was writing his text, as is important for modern students to realize, practically no books on point set topology for undergraduates existed. Previously, universities gave serious courses in  topological spaces solely to mathematics graduate students. These students would first master undergraduate real analysis in Euclidean spaces (then called advanced calculus).

Obviously, undergraduate mathematics is a very different beast today. Modern presentations of real analysis/advanced calculus extensively use concepts from point set topology. This provides a unifying general framework for the more concrete concepts of rigorous limits, continuity and convergence of functions and sequences in ℝn. The post-World War I years experienced explosive growth of the role of basic topology in both geometry and modern analysis at the research level. As a result, many research mathematicians pushed adamantly for a much earlier, more accessible and thorough introduction to point set topology for students. Indeed, many believed it appropriate to introduce topology either before or concurrently with advanced calculus to provide a modern context. Hence,  there is a need a text for topology students without a serious real analysis background. Hall and Spencer is exactly such a textbook.

A Topology Text Ahead Of Its Time

Point set topology is an essential skill for future researchers in functional analysis, modern differential geometry and topology. This is because it generalizes the concepts of continuity and convergence to abstract spaces.Many of the classic textbooks on the subject cover the subject exhaustively and at the highest possible level of generality. The result of using traditional textbooks has been that students spend 2 semesters learning far more general topology on abstract spaces then most of them will ever need to use or know. More importantly, students get the impression from geometers and topologists in later courses that they “wasted” a year of their studies. Most practicing researchers don’t even consider this topology anymore. This leaves many of them feeling deceived and frustrated.

Unfortunately, the reaction in recent books is to write texts that only present the barest minimum of point set topology. They discuss only what’s essential for advanced geometry or algebraic topology . Indeed-some recent beginning textbooks largely skip general topology altogether. They jump straight into curves and surfaces, elementary homotopy and the fundamental group! We believe this ludicrous solution is essentially throwing the baby out with the bathwater.

Mathematicians should consider this new edition of Hall/ Spencer as the benchmark for such a course. We believe the book contains all the point set theory any student needs to learn regardless of level or interest.

Contents of The Book

The book covers sufficient theory for the future mathematician to pursue research.  The book falls into two rather distinct parts. The first half is concerned with an introductory study of topological and metric spaces. Chapter 1 introduces and discusses basic operations with sets, relations and mappings. It then introduces finite, infinite and uncountable sets. Chapter 2 introduces the basic topological structure of the real numbers in a review of basic analysis. Next, Chapter 3 introduces general topological and metric spaces and develops such topics as compactness, separation and general continuous functions. Then Chapter 4 pursues metric spaces  further and discusses local connectivity, countability, metrizability and completion.

The second part is less elementary in character.  Chapter 5 is the longest in the book. It concerns  topological characterizations of arcs, simple closed curves, and simple closed surfaces. All of these are greatly important in modern geometry and analysis. Chapter 5 also covers the important example of Peano spaces and proves the Jordan curve theorem and Jordan-Schoenflies theorem. Chapter 6 discusses partitionable spaces, a topic often missing from modern introductory texts. Finally, Chapter 7 discusses the axiom of choice, Zorn’s lemma (i.e. the Hausdorff maximality principle) and the Tychonoff product theorem.

Why This Red Book?

The book in particular will help students understand the deep connection between general topology and real and complex analysis. The most natural path towards understanding topological invariants is to see how they directly generalize analysis on the real line. Also, Blue Collar Scholar founder/editor Karo Maestro has added his usual personal touch to the new edition. It contains a lengthy new preface on his own reflections on point set topology. He’s also adding a detailed list of recommendations for supplementary or subsequent study.

The prerequisites for the text are very minimal-just calculus and some experience with rigorous proofs. This wonderful lost text serves a new generation of mathematics students who are learning this crucial subject. Hall and Spencer indoctrinates students into the beauty and simplicity of point-set topology. In this inexpensive edition, this book convinces the readers of the subject’s broad importance.

Click here to buy the paperback version at Amazon.

NOW BACK TO THE HOMEPAGE FOR MORE OF OUR WONDERFUL TEXTS!