Warning: Invalid argument supplied for foreach() in /home/customer/www/bluecollarscholarmathgeek.com/public_html/wp-includes/class-wp-theme-json.php on line 1091
 COMPLEX ANALYSIS TEXT BY PHILLIP FRANKLIN –BY ONE OF THE 20TH CENTURY’S MOST FAMOUS MATHEMATICIANS AND TEACHERS - Blue Collar Scholar
Skip to content

FUNCTIONS OF A COMPLEX VARIABLE: A FIRST COURSE BY PHILLIP FRANKLIN –A BEAUTIFUL FORGOTTEN INTRODUCTION BY ONE OF THE 20TH CENTURY’S MOST FAMOUS MATHEMATICIANS AND TEACHERS-BACK IN PRINT FOR NEARLY 5 DECADES!

NOW AVAILABLE AGAIN AS BOTH A KINDLE AND INEXPENSIVE PAPERBACK BY BLUE COLLAR SCHOLAR! 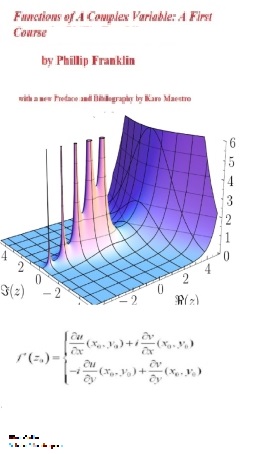 NOW, THIS CLASSIC TEXTBOOK, ANOTHER LOST GEM OF A TEXTBOOK, THIS ONE ON COMPLEX ANALYSIS,IS BACK IN PRINT FOR PURCHASE AT A PRICE ALL STUDENTS AND TEACHERS CAN AFFORD!

BEST OF ALL, BOTH A BRAND NEW PREFACE & COMPREHENSIVE SUPPLEMENTARY BIBILIOGRAPHY HAS BEEN WRITTEN BY KARO MAESTRO AKA THE MATHEMAGICIAN!

This excellent work on the classical properties of the analytic functions of a complex variable was evidently designed to serve two purposes: (1) to provide mathematics majors at the advanced undergraduate level or the lower graduate levels an introduction to [complex analysis] and perhaps to analysis in general, and (2) to provide for physicists and engineers a basic text and a reference work on the fundamentals of the subject. In the reviewer’s opinion it is admirably suited for both of these programmes. The exposition is rigorous but not tiresome, and suitably modern but definitely not pedantic. Apparently, this book was very carefully composed and its structure is such that the beginner can attain a solid knowledge of the subject by through a series of stages (81 articles in all) of fairly uniform and moderate difficulty.
Homer Craig, Amer. Math. Monthly 66 (10) (1959), 931-932

After an introductory chapter on complex numbers, the text covers continuity and differentiability of functions of a complex variable, power series, the elementary functions, conformai mapping, Cauchy’s theorem and Cauchy’s integral formula, Taylor and Laurent expansions, calculus of residues. The book seems well suited to a term-course in complex variable. Although it appears to be primarily intended for students who are not majoring in mathematics, the standard of rigor is rather high; the treatment of Cauchy’s theorem is close to that in Ahlfors’ Complex variables.The book contains many exercises, most of them rather easy. In some instances the nomenclature is a bit old-fashioned (functions are allowed to be “multiple-valued,” connected = arcwise connected) ..-W. Fuchs

Yet Another User Friendly Classic

Blue Collar Scholar makes yet another wonderful out of print textbook available to everyone with this outstanding introductory text in complex analysis. This excellent and unusual introduction to functions of one complex variable is now being reissued after nearly 60 years by Blue Collar Scholar/Createspace. We’re proud to have it as part of our unearthing of long-out-print quality textbooks in inexpensive editions.

Firstly, this book by legendary analyst/teacher Phillip Franklin gives a complete and above all, balanced first course in complex analysis. Where most introductory modern books on analytic function theory usually take either a geometric approach (via complex differentiability and conformal mappings) or an analytic approach (via local power series expansions of complex functions), Franklin gives neither precedence. Both aspects of the subject are woven together in equal measure in his presentation, emphasizing the connections between them.

Walking Before You Run

Secondly, the book builds incrementally in intricacy. It begins with the simplest and most obvious properties of the complex plane and gradually increases in difficulty as one proceeds. Therefore, this determines that the analytic aspects are back-loaded into the second half of the book.

For example, the first 5 chapters characterize the deep interplay of plane geometry and analysis with the complex numbers. In particular, the fractional bilinear transformation is examined in detail, which is one of the most important conformal mappings because it completely encodes all the classical Euclidean transformations of the plane. Later chapters cover singularities and integration over the complex plane as well as Riemann surfaces. This is a very wise organizational approach, born of many years teaching the subject to strong students in both pure and applied mathematics.

Thirdly, while there are an immense number of complex variables textbooks on the market, there are still relatively few standard quality ones that are available inexpensively. Also, let’s face it-many departments would hesitate to use other books then classics like Alfhors, particularly at top programs. This is because of an irrational, almost religious reverence for such works.

Whether or not you agree with this reverence or not, it’s ludicrously unfair that this decision has to be a problem at all because of the insane prices of these texts. Therefore we’re republishing this old classic because it’s comparable to any of these in coverage and superior to some in exposition-and it’ll be far less expensive.

Written for The Beginner

Yet another reason is the book’s style: It is modern without being overly terse. Franklin’s book is brief without lacking detail-it covers just about everything one wants covered in a first course on the subject and it does it in a brisk span of 255 pages. It emphasizes the wonderful interplay of analysis and geometry that forms the heart of classical complex analysis. The book also does so with minimal background. In fact, the only real prerequisites for most of the book are multivariable calculus and some rigorous analysis. In addition, there are many exercises, varying widely in topic and difficulty. These provide not only drill, but greatly expand the actual coverage of the book.

Lastly, the wonderful pedigree of the author that’s been all but forgotten. If you’re a student or professor of mathematics and you’ve never heard of Phillip Franklin, you can be forgiven as his era now lies far behind the current generation. In fact, he was one of the most famous American-born researchers and teachers of mathematics in the first half of the 20th century. Older professors who were students at The Massachusetts Institute of Technology in the 1960’s speak of him with hushed awe of meeting the then-long retired Franklin.

Franklin was one of the first American mathematicians with a truly modern training; getting his doctorate at Princeton University under Oswald Velben in 1922. He began his career by spreading knowledge of the frontiers of mathematics to the other top programs. Franklin then moved on to MIT, spending the bulk of his career, both teaching and doing research. His research output ranges over a number of fields, including number theory, graph theory and topology. However, his work in analysis is probably most significant. In addition, many mathematicians consider his remarkable textbooks the gold standards for his generation.

Some Topics in the Text

In addition, Blue Collar Scholar editor/ founder Karo Maestro has written a personal,informative and entertaining new preface. He intends it as an introduction to this remarkable field.  He has also added a new recommended reading section guiding the student to further study. Hence, both teachers and students will have a much-needed guide to the vast textbook literature on this important subject.

Complex Analysis By A Master

As said above,prerequisites for a course based on Franklin are very minimal for a course in complex analysis. Those prerequisites are multivariable calculus and an “ε-δ” single variable rigorous analysis. In fact, Chapters 2-10 of our advanced calculus book by W.Benjamin Fite supplies more than sufficient background for Franklin’s book. For the sections on complex integration, experience with line integrals in vector analysis of the plane. Students can find this material in chapter 3 of Kenneth Miller’s book.

A knowledge of classical plane geometry would also be extremely helpful.However,it’s not really necessary. Readers need no further experience with rigorous mathematics or proof techniques.

Why Frankin And Why Now?

Complex analysis is one of the oldest subjects in mathematics, nearly as old as calculus. Hence, even at the time when Franklin was writing this book, a considerable number of textbooks already existed. But none are appropriate in level for the students at MIT Franklin was teaching to.

This book is more rigorous then recent texts at the same level. However, it’s definitely not a pure theoretical presentation by any means. Therefore, it would be an accessible first course for both math and science students.Publishers are currently reissuing many of Franklin’s other textbooks, which all share the author’s wonderful pedagogy.

Which brings us to the major reason we’re reissuing this text. Because of the Space Race, there was considerable upgrading of mathematics requirements in the 1960’s. So complex analysis, once an elective of rather specialized interest, is now a required course. Subsequently, today’s undergrads have largely regressed at least to the pre-World War II preparation level.

The Method To Our Madness

It is the belief of the publisher that making quality textbooks available inexpensively assists greatly in upgrading math training. We accomplish this by encouraging both self-study and the use of multiple texts for any course.

Franklin’s textbooks are very good examples of the kinds of texts we plan on making available. Therefore, we aim to strengthen the revival of interest in this largely forgotten mathematicians’ educational works. This wonderful introduction to complex analysis is our first try.

As a result, the republication of Franklin at such an inexpensive price encourages the use of this book. This careful, rich and inexpensive text is a fantastic choice either for a complex variables course or self-study.

Because its’ literately written with many pictures, this is a superior, inspiring and affordable course on complex analysis. Therefore, it will provide a rock-solid foundation for further study.

At any rate, buy this book to help fuel this movement in academia!

Back To The Homepage For More Of Our Wonderful Texts!

This site uses Akismet to reduce spam. Learn how your comment data is processed.