CALCULUS COURSE BOOK IS BACK

IN PRINT FOR PURCHASE AT A 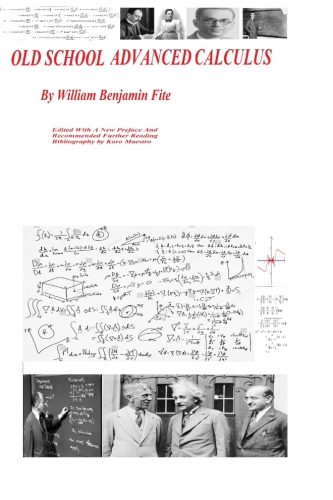 MOREOVER, THE NEW EDITION CONTAINS A LENGTHY HISTORICAL PREFACE ON THE HISTORY OF ADVANCED

BIBLIOGRAPHY  ON CLASSICAL ADVANCED CALCULUS TEXTS FOR THE PURPOSE OF DIRECTING THE USER IN FURTHER STUDY!

WRITTEN BY BCS FOUNDER AND

CEO KARO MAESTRO AKA THE

“As the author states in his preface;

….this book has been written to supply an introductory course in mathematical analysis for those who are looking forward to specializing in mathematics.

To the reviewer it seems that the stated purpose has been attained in a satisfactory  manner. Assuming

familiarity with the working rules and simpler applications of the calculus, the first part of the book discusses the

meanings of the fundamental concepts of the derivative and integral together with proofs of the fundamental theorems. The selection of subject matter in the book conforms with that which has now become somewhat standardized for a course in advanced calculus……….. There is sufficient material in the book for a year’s work. The style is clear, and the treatment is perhaps as rigorous as

is possible for  the average student at this stage of his development.”

Advanced Calculus  is exactly what the

title says it is: A full year course in

advanced calculus the way it was

offered at all  American universities

for most of the 20th century.

In particular, Fite’s book has been

reissued in the hope that it brings the

advanced calculus course as it was

taught for nearly half a century

back into the consciousness of

science students and educators with

In truth, the traditional American university advanced calculus syllabus slowly emerged over decades and reached more or less final form in the early 1930’s. Subsequently, it was a standard mandatory undergraduate sequence until the early 1970’s. Eventually,for various reasons,the course was then sundered into various “analysis for mathematicians” and “analysis for physical science students” courses. Therefore, mathematics and science students afterwards had very different post-calculus requirements then previous generations.

composed of a first semester of single

a rigorous presentation of the

various limits of functions on the real

line and their important applications.

did the same for functions of

In  fact, this second

semester was considered the most

important one since this was where

both mathematics and physical science

majors would learn functions of

several variables and its applications.

Indeed, there was not yet a standard

as a “Calculus 3/Multivariable

Calculus” course. Therefore, you had

to take advanced calculus to begin to

learn about functions in Rn.

Nevertheless, all students in the

of several variables in order to

progress beyond the beginning level.

For this reason, the performance of

students in the classical AC course was

Specifically, the author does a

terrific job of combining a careful

calculus of one and several variables

with many applications to

The main advantage of the original

by Fite, is a unified presentation of

mathematical analysis of one and

comprised virtually all the main topics

needed by both mathematics and

uniform terminology and level of

Therefore, even if each semester

was taught by a different faculty

member, they were both bound by

more or less the same syllabus.

restricted dramatic divergence in their

throughout the entire course a balance

that benefits all involved is achieved

and maintained. For example, both

learn the basic structure of classical

to important physical and geometric

applications along with mathematical

On the other hand, physics and

engineering students get exposed to

pure mathematics and the

skills it builds in

them that will be invaluable when they

only high school algebra and geometry

as well as a year- long basic (non-

course as prerequisites. So that a

course based on Fite will give both the

beginning mathematics major and the

In addition, its’ many

in preparation for further research in

physics or additional fields which

More importantly, because of the

low prerequisites, Fite  is quite

versatile.  Therefore, it can be used for

a number of different courses, either

course for strong freshman or

independent reading by students or

professors in other sciences who need

to learn advanced calculus beyond

Most noteworthy, a lengthy new

preface has been added by Karo

Maestro explaining the history of the

In fact, Fite’s book was one of the first

standard such texts. Therefore, this

Also,he has added a recommended

reading section reviewing many of the

• limits and differentiability properties (derivatives, differentials, partial derivatives, etc.) of real valued functions of one and several variables including the Mean Value, Implicit And Inverse Function Theorems in R2 and R3

• A careful presentation of the Riemann integral in one variable in terms of Darboux upper and lower sums and many standard applications of it, such as solids of revolution, areas under curves and trapezoidal approximation

In addition,  some important integrals that you usually don’t see in more modern analysis books, such as elliptic and Abelian integrals.

•Improper integrals, their convergence conditions and a detailed presentation of the gamma function with applications

•An unusually comprehensive treatment of infinite series including unusual topics such as double series, quasi-uniform convergence and a detailed discussion of Weierstrass’ example of a continuous function with no derivative at any point in its domain, the theory and applications of power series, trigonometric series with emphasis on Fourier and orthogonal series and some of their applications to partial differential equations

As said above, the prerequisites for a

course based on Fite are very minimal.

In fact, those prerequisites are just

as well as a non-rigorous single

also ideal for self study.  Further, no

or proof techniques is necessary.

It’s quite important to understand why this is true in a historical context.  When Fite wrote this book, it would be 20 years before independent “methods of proof” type courses were introduced. Previously, the advanced calculus course was where math students-both pure and applied-began to transition from plug and chug type courses to where rigorous proof was the order of the day.

As a result,while being certainly more careful then a current calculus course, Fite’s book is somewhat less so then a modern real analysis course such as one based on Apostol or Rudin would be. Hence, it would therefore be more accessible to a larger number of undergraduates then those books without sacrificing any rigor.

Which brings us to the major reason we’ve decided to reissue this text. The reforms that made the old AC course obsolete were done in response to the strengthening of mathematics requirements in 1960’s as a result of the Space Age. Subsequently,today’s undergrads have regressed at least to the pre-World War II preparation level. Consequently, the audience for the far more abstract analysis courses is now limited to the very strongest pure mathematics students.

Therefore, it is the belief of the publishers that a return to the original advanced calculus sequence-with appropriate modifications, of course-should be strongly considered.

As a result,the republication of this book at such an inexpensive price certainly encourages this rethinking of today’s course syllabus. At any rate, buy this book to help fuel this movement in academia!

Above all, with this text now available and affordable,this course in advanced calculus can studied as originally intended for a new generation of mathematics & science students and teachers of analysis! Accordingly, it should become a standard text now for university students and teachers, either as a main text or as a supplement for self study!

Also For Sale At BCS:

Authored by Keith S. Miller With Additions by Karo Maestro

Certainly,this brief and inexpensive text intends to provide a modern introduction to vector analysis in R2 and R3.

Granted that Fite’s book is otherwise

of functions of several variables is

rather archaic and purely analytic.

Nevertheless, vector analysis is now a

necessary part of the mathematical

training of both mathematics and

the absence of vector valued calculus

in Fite is a highly problematic void.

this book by Miller with Fite

is specifically intended the rectify this

for both groups of students.

In addition, despite mostly classical

material to modern formulations so

For example,he carefully lays out

vector algebra in the first chapter

detailing their algebraic structure as a

vector space over the real or complex

numbers. As a result, this keeps the

very general.  Therefore, this invites not only mathematics majors,

and other fields that need to either

review or learn this material.

In addition, although the book is intended to supplement Fite, it can certainly be used as a vector analysis text in its’ own right. Currently,most of the current standard books on vector analysis are rather expensive and lengthy.

Although Dover Books has made available a number of inexpensive classical books on vector analysis, many of these are quite old fashioned. Therefore, they may be difficult for students to read.

Consequently, this book -either by itself or used in conjunction with another text or lecture notes-gives students a very affordable option.

Finally, the book’s brevity and low cost make it an indispensable study aid for students who need to learn or review this material quickly and accurately.

AGAIN,BUY BOTH THESE WONDERFUL BOOKS!

Back To The Homepage For More Of Our Wonderful Texts!